One of the biggest questions in the nascent smartwatch market is whether luxury watch wearers will ditch expensive but limited mechanical watches for less prestigious but more-functional smartwatches. Swiss watchmaker Montblanc thinks it has a solution for everyone: Simply stick the smart electronics in the band. You can keep your fancy luxury timepiece on your wrist while getting notifications and fitness tracking data from a screen on the inside of your wrist.

Montblanc revealed the e-Strap in an email to customers and watch enthusiasts on January 1st and it’s expected to be officially announced at a watchmaker’s conference in Geneva this month. 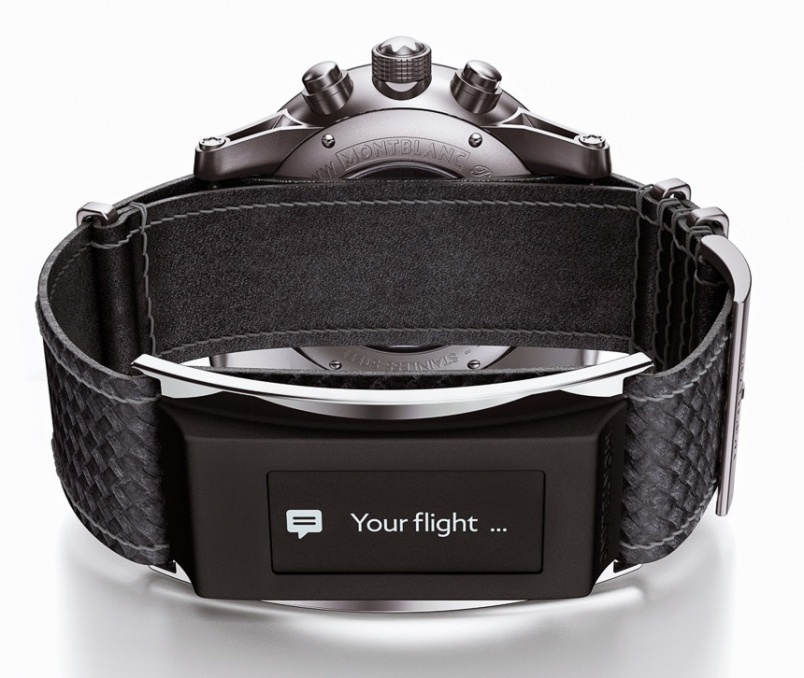 It appears that the e-Strap is running Montblanc’s own software — although the screenshot looks a little bit like Microsoft Band — and according to the email, the strap should be able to measure steps and calories as well as provide notifications for text messages, emails, incoming calls, and “social feeds.” It can also be used as a remote control to play music or trigger a camera shutter.

Thanks to its touchscreen black-and-white OLED display running at 128 x 36 resolution, the e-Strap should be able to run for five days without needing a charge. When it’s out of batteries, users can top off the power with a micro USB cable.

Interestingly, it appears that Montblanc may have an agreement with Samsung. Although the e-Strap will work with both Android and iOS devices, Montblanc uses Samsung phones in its promotional images, and specifically outlines that the device works with “Samsung Galaxy S4, S5, Note 3, and Note 4″ in its specs.

The E-strap will debut on Montblanc’s Timewalker Urban Speed line of watches, which start at 2,990 euros (US $3,592), but you will be able to pick one up on its own for 250 euros. The 20mm wide strap should work with most watches that take 20mm to 24mm watchbands.

The strap by itself looks fairly attractive, from the provided photos, made from what Montblanc calls “Extreme Montblanc Leather” which resembles carbon fiber. If the look doesn’t work for you and your collection of vintage timepieces, Montblanc is preparing a “stand-alone chic bracelet” version that will cost 450 euros.